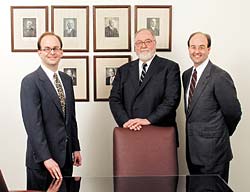 Standing in front of the portraits of the 1st, 2nd, and 3rd generations of Wrights at Reed Manufacturing are (L-R) Scott Wright (5th Generation), Ralph Wright (4th - deceased), and Mark Wright (5th - retired). Five generations of Wrights have also provided a great place to work and exceptional contributions to the community. Reed Manufacturing is a big supporter of the Erie County United Way ($1,880+ per capita for 2022), the Second Harvest Food Bank, EUMA of Erie, along with WQLN Public Television, among others. Additionally, REED Associates are encouraged to give back to the community through gifts of time, money and service.

Reed Manufacturing in Erie, PA is celebrating 125 years of supplying industry with the highest-quality pipe tools and vises for the professional trades. Carl Reed, scion of one of Erie’s pioneer families, along with three partners, started the business in 1896. In 1899 they filed papers to incorporate as Reed Manufacturing. The filing stated that they had $100,000 in capital and that they made a variety of products including pipe wrenches and plumbing supplies, as is still the case, but also scales, bicycles, and laundry machinery. They built the iconic ivy-covered building at 1425 West 8th Street that same year.

In 1902 Reuben Wright of Westfield, NY (a mere 35 miles from Erie), who had created his fortune by selling supplies to forty-niners during the Gold Rush and added to it with lumber interests, bought the company and installed his elder son Paul as president and his youngest son Ross as secretary-treasurer. Reuben’s great-great grandsons Scott (Company President and Chairman of the Board) and Mark (Retired and a Board Member) are actively involved with REED to this day.

REED tools were used in the construction of the Panama Canal. Subsequently in 1915, REED bench vises were awarded a gold medal and REED pipe dies received a bronze medal at the Panama-Pacific International Exposition in San Francisco. A distantly related pair of Wright brothers, Orville and Wilbur, used a REED vise in their Dayton bicycle/aviation shop. REED was a defense contractor during both world wars, turning out stocks, dies, and pipe cutters in the Great War and wrenches, turbine buckets, and airplane engine mounts for World War II. Additionally, their Shaw Machine for pressing collars was installed in all Navy ships and could be found in most commercial laundries across the United States. In 1947 the company expanded by adding a second plant at 421 West 12th Street. That property was sold in 1985 and REED continued expanding through global sales. REED was exporting from early in its existence with relationships in Europe and beyond.  They increased their international sales team and by 1993 they were exporting to 75 countries.  Today REED sells into over 100 countries. Still housed in the historic building at 1425 West 8th Street, REED remains an Erie landmark.

From the company’s beginning, REED associates have invented tools that continually become industry standards, including the Quick Release™ Tubing Cutter, various tools for plastic pipe, vises, plus Hinged Pipe Cutters and Rotary Pipe Cutters for large diameter pipe. In addition to new tools, each year REED makes end-user driven improvements and refinements to existing tools. The BEST EVER designation is given to a tool whose quality, benefits, or performance has been significantly improved over all previous versions. These continuous improvements are advantages to buying REED.  WHY REED? statements throughout our literature and website explain why that REED tool is superior to any other on the market. The information also can be used with confidence to compare REED products with competitive methods. Each year brings more additions and improvements to the breadth and depth of the REED tool line. Recent additions include Pump Stick® water transfer pump, Clean Ream Extreme® fitting reamers, Bevel Boss™ pipe beveler, Bear Hug™ squeeze tools, along with continuous improvements to long-standing tools.  REED takes pride in manufacturing high quality tools to provide tool solutions.

Committed to providing the best customer service in the industry, REED’s principal goal is to ship 95% of orders complete within three days. Since many inside sales people are trained with outside sales personnel, they know the tools, the industry, and the answer to just about any question. REED customer service staff routinely strives to expedite rush orders the day of receipt, thus helping distributors and tool-users meet their own service obligations. The complete team of REED Associates, Regional Managers, and Manufacturer Reps works together to provide excellent service to distributors and tool-users.

The secret of REED’s continuing, increasing success can be attributed to its corporate culture of excellence and the quality of its company associates, who are individually committed to exceptional performance and service. Over the past century and a quarter, Reed Manufacturing has tirelessly worked for the betterment of Erie County, through the United Way and its predecessor the Community Chest. REED and its employees have supported dozens of organizations in categories from the arts to scouting to reducing poverty to medical causes. Its employees have contributed on an individual basis to fund drives including war bonds. With participative management and profit-sharing for all, REED people, products, and service will continue to excel. REED is progressive and will continue to improve its customer offerings throughout each of its next 125+ years.

In addition to detailed tool knowledge from the REED staff, the www.reedmfgco.com website offers a wide range of product information and company history. Find the most convenient place to purchase REED tools worldwide in the WHERE TO BUY database. An online cutter wheel search saves time finding the right REED cutter wheel for the cutter of any manufacturer. To reach the worldwide audience to match REED sales, the website is offered in Spanish, French, German, Chinese, Russian and Japanese translations, accessible from the world map on the homepage. REED sells in 100+ countries around the world in these major tool categories:

Update your information for REED's eNewsletter